The overarching responsibility of the marketer is to persuade the audience of one thing: why they should choose your company instead of another.

The foundations of persuasion were established in Greece thousands of years ago, and though many a young “content creator” may not know it, the principles Aristotle posited in the 4th century BC are still in use today.

In modern times, marketers have gotten pretty good at using the first two devices. Ethos has taken the form of case studies and user reviews, and logos can be found in ROI calculators and feature comparisons.

Pathos, however, has become remarkably rare, or at least ineffectual, in the B2B world.

Pathos has become remarkably rare, or at least ineffectual, in the B2B world.

The prevailing logic is that business people only need facts and figures to come to a conclusion. This ignores a great deal of research about how people make decisions.

Studies have found that as much as we’d like to think we make decisions based on data, we’re actually incapable of making decisions without emotional responses.

A lack of pathos (i.e., a lack of empathy) with the audience indicates an absence of understanding. And without understanding, it’s impossible to consistently persuade people to choose your brand over a competitor’s.

The Dilemma of Demand Generation and B2B Leads

The modus operandi of demand generation marketers is to increase conversion rates and hit lead generation numbers. As a result, we discuss our jobs in mechanical terms, like “driving traffic to landing pages” and “getting lists ready for email campaigns.”

We refer to the people we’re trying to persuade as “B2B leads.”

This language creates social distance, a scientific term that describes a cultural disparity between individuals and groups.

ALSO READ: The Art of Demand Generation vs The Science of Lead Generation

Tasked with improving numbers on a spreadsheet, marketers become divorced from their audience, and we delude ourselves into thinking we know what they want.

This is reflected in the flood of logos and ethos-backed marketing, while research consistently emphasizes the pervasiveness of emotions in our decision making — even in B2B buying groups.

Logos by the modern marketer

A message based purely on logic may make sense to the CEO, but it doesn’t resonate as deeply as a concerted call to people’s emotions.

This brings us back to the dilemma of the demand generation marketer.

Is demand generation the operational job of shoveling B2B leads to sales? Or is it a profession tasked with understanding the reasons why humans choose brand A over brand B and then using that understanding to turn the tide in your company’s favor?

The answer lies somewhere in the middle, but in its current state B2B demand is heavily skewed toward operations. This myopic focus on accumulating more B2B leads instead of discovering what motivates human beings is crippling demand generation (click to tweet).

If demand generation is flawed, how do we change it?

Begin by making the case for exploring the psyche of your customer. It’s actually a simple argument to make with a little bit of logos.

Customer experience can be the key differentiator among close competitors, and with its ever-expanding reach, marketing is the perfect repository of customer knowledge.

Marketing needs to know the most about customers because they control the most interactions with the audience (click to tweet). The better researched those interactions, the higher the chance of success.

Once you have leave to do some research, start by investing heavily in your personas. The quantitative side of personas can be useful, but it’s really the qualitative data you want. Direct quotes are excellent tools for encouraging empathy.

As we read someone’s honest feedback, it’s significantly easier to understand and identify with them. If you ask the right questions, there shouldn’t be much ambiguity in people’s responses. Ask them what you want to know, and they’ll tell you.

After you have direct quotes that attribute real emotions to your audience, you can use that information throughout the customer experience — from advertising campaigns that attract interest to the email campaigns that help grow that interest into intent.

Speaking to their audience on an emotional level is something Slack does brilliantly in their advertising. The company’s video spot doesn’t rely solely on logic to sell their product; instead, the campaign shows how cute animals (emotional cue) use Slack to work together and build an incredible product (emotional cue).

In this campaign, Slack appeals directly to the emotional needs of the audience. Everyone wants to accomplish something important at their job — to feel like they have meaning — so Slack positions their product as a gateway to achieving that feeling.

A narrower application of this strategy can also be found in the company’s banner ads. Instead of talking about features or pricing, Slack connects its product with a feeling. 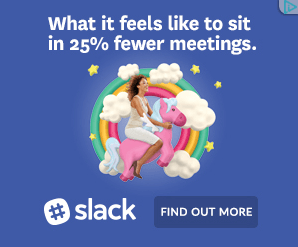 While advertising is an obvious outlet for pathos, empathy has a place in the operational aspects of marketing as well.

Every time you design a new email campaign, empathy plays a part. Marketing automation technology has given marketers an unprecedented ability to email their audience. But how closely the marketer empathizes with the recipients can affect how many messages are sent, how often they’re sent, and how useful they are.

Will the campaign be a “blast to a database of B2B leads,” or will it be a series of honest messages written for human beings?

It seems the former is more common, which is why nearly 45 percent of people wish businesses would email them less. It’s difficult to speak to someone on an emotional level when you’re blasting them three times a week with the same generic offer.

Persuasion is a complicated art, and pathos isn’t the only way to successfully convince people. Aristotle identified three rhetorical devices, not just one. But marketers need to guard against losing touch with the powerful emotional cues that drive people to make decisions.

The No-Nonsense Guide to Your First Lead Generation Program

Learn the basics of the lead funnel, how to manage your leads, how to make a smooth handoff to the sales team, and how to know when you’re ready to purchase leads.